Why would someone pay $2500+ for a children’s toy that is roughly the size of a cough drop?

Please allow me to introduce you to Mr. Gold.

Mr. Gold is almost completely golden. He has a gold top hat, a gold face, a gold torso that looks like a tuxedo, and gold legs.

His hands are the only exception; they are white, to represent gloves.

NOTE: This minifigure is NOT made of precious metal. It’s just shiny gold-colored plastic.

Would you believe that people are willing to pay thousands of dollars for this tiny plastic toy that weighs less than 4 grams? 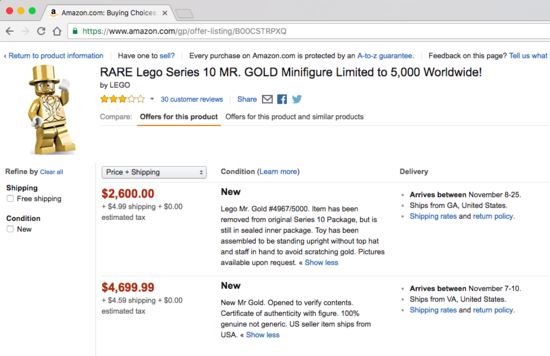 There are also Mr. Gold minifigs available (and sold) on eBay for more than $2500.

Why would someone pay $2500 or more for a children’s toy that is roughly the size of a cough drop?

And why do they want it?

Because he is rare, unique, desirable.

(See where I’m going with this?)

The way to make yourself rare, unique, and desirable is to position yourself as a specialist.

The result of positioning yourself in this way is that you will be able to deliver previously unimagined levels of satisfaction (aka value) to your ideal clients, for which they will pay you so much that it’ll probably make you uncomfortable at first.

P.S. Of course, you’ll have to abandon hourly billing if you want to charge uncomfortably high prices. For more info on this, check out my book -> Hourly Billing Is Nuts